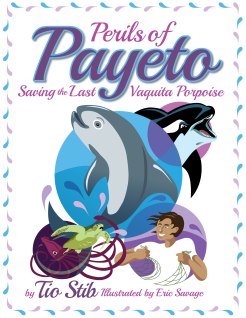 In the nearby town of San Pedro, two teenagers, shy Miguelito and precocious Magda, struggle to find a hopeful future in a community whose fishing industry has collapsed.

Payeto’s perilous journey brings him face to face with the monster Red Devil, Maku, the King of the Sea Wolves, and finally the most dangerous predator of all, Man.

Zorro, the mischievous monkey, Sanchez, the good hearted ghost, poachers, drones, a secret beach, Ancient Irma, the wise whale, and Sonya, the powerful shaman, all add to the intrigue, humor, and adventures of Payeto, Miguelito and Magda.

Discover the surprising climax when the world’s of Payeto and the two teenagers finally collide.

Click here to check out “Perils of Payeto, Saving the Last Vaquita Porpoise.” Available in English, Spanish, and bilingual formats.

The vaquita porpoise is the smallest in the porpoise family and lives only in the northern part of the Gulf of California. In January, 2018, it was estimated only 29 vaquita remain. The situation is critical! The primary threat to this endangered species is fishing by-catch, being accidentally caught in fishing nets. Although the government of Mexico has taken several steps to save the vaquita, including the creation of refuge areas, and numerous international organizations are actively working to save the vaquita, the situation is precarious. Your active support is needed”

Here are some links you can visit for more information-

I encourage you to be an activist in building a better world!

Travels With Tio, A Blind Man\’s Path To Happiness